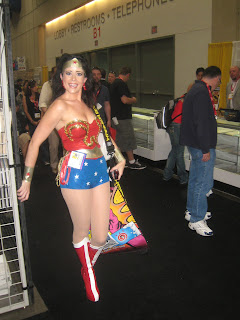 The theme of the con, according to The Wildman, is "They have lost the plot".
From excessive standing in line, to not being able to get into panels, to huge crowds, the convention seems a little lost. To top it, next year the rates go to $175, with no discount for those who get full con badges.

It becomes a test of endurance, like Shao Lin temple aspirants waiting outside the gates until only one is left. To some, it is just about bragging "I went to San Diego Comic Con and you didn't". Servers crashed multiple times when online registration was attempted fro m late last year until around February this year. Only those of us willing to backspace and refresh repeatedly for hours were even able to get badges.
Posted by Sushi Emperor at 8:19 AM